The Center for Justice filed a lawsuit in Rhode Island Superior Court today on behalf of seriously ill and disabled consumers whose electric and gas utility services have been shut off.   The lawsuit, requesting class action status, seeks to stop utility shut-off practices of National Grid and the Rhode Island Division of Public Utilities and Carriers that violate state and federal law. 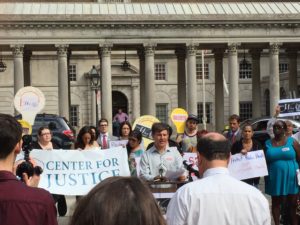 The named plaintiffs suffer from severe medical conditions including chronic respiratory failure, which requires electric powered oxygen machines.  They asked National Grid to take their medical conditions into consideration when setting up a payment plan for their back bills, as required by law.  When National Grid sent shut-off notices without making the required legal determination, these consumers looked to the State regulator of public utilities for protection but were repeatedly denied.  Some plaintiffs required emergency medical treatment and hospitalization after their electric and gas services were shut off.

Rhode Island law restricts termination of utility services for nonpayment of arrears when one or more household member is seriously ill or disabled.  The lawsuit details National Grid’s failure to follow these rules and the Division’s routine approval of utility termination regardless of threats to health and safety.  These illegal practices affect more than three thousand consumer households in Rhode Island.

Attorneys for the plaintiffs are requesting immediate relief through a temporary restraining order.  Consumers who are shut off now may go all winter without utilities.  Low-income, disabled, and other protected status utility consumers are generally shielded from shut off during the winter heating season but not entitled to restoration of service if already shut off. National Grid is expected to accelerate shut-offs in the weeks before the November 1st moratorium, as it has in past years, posing the danger of heat and electricity deprivation for medically vulnerable households during cold winter temperatures. A temporary restraining order would prohibit utility termination to the proposed class of utility consumers’ residences and restoration of service for those who are now shut off.

“The last time I was shut off, I panicked,” says Tiverton resident and plaintiff Penny Medeiros. Ms. Medeiros has a condition that requires 24 hour electric powered oxygen.  “I tried to pay what I could and got help from charities to pay National Grid, but they wanted more and then they shut me off.   I had to use my emergency supply of battery powered oxygen and was getting ready for the ambulance.  Then Senator Reed’s office called them and I got my service back on.” National Grid is again seeking to terminate Ms. Medeiros’ electric service and the Division has authorized shut off.

Since May, the Center for Justice has provided free legal assistance to hundreds of low-income, medically vulnerable utility consumers.   “The system is broken,” says Executive Director and attorney Robert McCreanor.  “National Grid routinely violates the law and the Division of Public Utilities automatically grants the shut offs National Grid requests. The consequences are severe for seriously ill and disabled consumers and costly for our communities.”

The Center for Justice works in collaboration with the George Wiley Center, a statewide non-profit community organizing and advocacy group.  For decades, the George Wiley Center has led efforts to make utility costs more affordable for all Rhode Islanders and increase protections from shut off for the most vulnerable.  “Every year we hear from thousands of Rhode Island residents who make tough choices between paying their utility bills and putting food on the table,” says George Wiley Center lead organizer Camilo Viveiros. “We need to close loopholes that result in shut-offs affecting people with medical conditions. The Division should advocate for utility consumers’ interests, not hinder utility access for Rhode Islanders who are struggling with energy insecurity.” 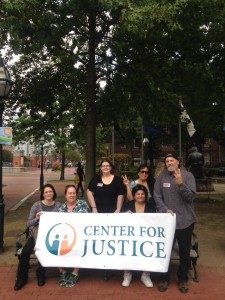 “In my work on behalf of medically vulnerable children and families, I have witnessed National Grid’s routine disregard for health and safety considerations,” says attorney Jeannine Casselman, legal program director of the RI Medical Legal Partnership at Hasbro Children’s Hospital. “Even in cases involving children with severe illnesses and disabilities, we see utility shut offs happening on a regular basis.  In some instances, this can lead to loss of housing altogether.  Rather than provide a reasonable repayment plan for struggling families, National Grid too often shuts off services, causing further disarray and trauma to low-income households.”

“Utility arrears are a huge obstacle to housing.  People who are both homeless and medically vulnerable need payback plans that are ‘just and equitable’ to move out of shelters and into stability,” says Karen A. Santilli, President and CEO of Cross Roads Rhode Island, a leading provider of social, educational and employment services to homeless individuals and families.

“The Rhode Island Coalition for the Homeless applauds the Center for Justice’s move to hold National Grid responsible to federal and state law regarding utility shutoffs for our most vulnerable Rhode Islanders,” says Jim Ryczek, Executive Director of the Rhode Island Coalition for the Homeless. “We know too well that medically vulnerable Rhode Islanders just cannot get their needs met when they fall into our shelter system. Shelters are just not equipped to serve medically vulnerable people. A stable home environment is best way to help those constituents meet their medical needs.”

“We know that far too many Rhode Islanders struggle to make ends meet,” says Rachel Flum, Executive Director of the Economic Progress Institute. “This is especially true for low-income residents who also suffer from illness or disability. National Grid and the Division of Public Utilities should follow the laws on the books to ensure that these vulnerable populations are not put at further risk.”

Posted in Uncategorized and tagged News, The Lifeline Project